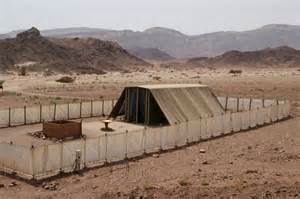 At Timna Park, 20 miles (32 km) north of Eilat in the Arabah, a life-size replica of the biblical tabernacle has been constructed. While no original materials (e.g., gold, silver, bronze) have been used, the model is accurate in every other way based upon the biblical description.
http://www.bibleplaces.com/tabernacle.htm

The Israelites would have carried a lot of the materials for the Tabernacle out with them from Egypt.  Not an easy task I would think.  We know that Moses had asked the people of Israel to ask the Egyptians for silver and gold jewelery and for clothing. These were given to the Israelites in large enough quantities for the Exodus record to state that they plundered the Egyptians.

How awesome is that.  He provided them with all these riches and those with willing hearts, brought it back to Him.  To use for His glory.  The way it's supposed to be - even today.

He supplied what was needed for the Tabernacle in the middle of the desert.  As He also supplies what is needed, as we walk in the desert here on our way Home.

The Holy Spirit.  Christ Blood.  His Word.  My Daddy.  Protecting - treasure/me - contained within the  - Tabernacle/Him.

Even dolphin skins go back to Him.
Posted by deby at 8:30 AM