"The role of salt in the Bible is relevant to understanding Hebrew society during Old and New Testament periods. Salt is a necessity of life and was a mineral that was used since ancient times in many cultures as a seasoning, a preservative, a disinfectant, a component of ceremonial offerings, and as a unit of exchange. The Bible contains numerous references to salt. In various contexts, it is used metaphorically to signify permanence, loyalty, durability, fidelity, usefulness, value, and purification."

I love The Message translation of Jesus speaking about salt - it is right to the point. 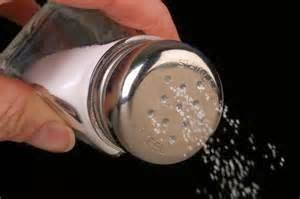 “Let me tell you why you are here. You’re here to be salt-seasoning that brings out the God-flavors of this earth. If you lose your saltiness, how will people taste godliness? You’ve lost your usefulness and will end up in the garbage."
(Matthew 5:13)

I tie this in with the verse from today and think about how each day I place myself on the alter as an offering to Him and wonder "how is the salt"? Have I resisted the world and self coming to Him as a pleasing flavor? Or have I been contaminated and unsuccessful at being an effective disciple? And it isn't about offering some of myself, but the all of myself.

Lot's wife was unable to totally give up what she desired and was focusing back. Her eyes left His face and she became a pillar of salt. I desire to be the salt He needs me to be. I do not want my legacy to be a "pillar of salt", but a perfectly seasoned life with a pleasing aroma to Him.

"Present all your offerings with salt" - just sort of slipped in there and got me to wondering why.

What is it about salt that is so important as part of the sacrifice. In Mark 9:49-50 He speaks about salting of the condemned, which is a rhetorical device indicating the severity of the punishment. "Have salt in yourselves, and be at peace with one another." The salt here refers to the goodwill that "seasons" positive friendships and compassion. Colossians 4:6 uses the metaphor of salt seasoning in speaking with intelligence and consideration.

During ancient Palestine salt was variably and widely used as a symbol and sacred sign. It was used as a covenant of friendship, sometimes the eating of it was required. Salt land is a metaphorical name for a desolate no man's land. Defeated cities were sometimes salted to consecrate them and curse their re-population.

Bishop K.C. Pillai, from India, testifies that the salt covenant is much more than a covenant of friendship. it is an irrevocable pledge and promise of fidelity. Those who have taken salt together would rather die before they would break their covenant. He further states that the penalty for violating such a covenant is death.

Through the death and resurrection of Christ, we are now offered The New Covenant. God is holding it out to us for the taking. All we have to do is offer up ourselves. He will not pull away or break this covenant when we accept it. Only we are able to break it, by turning away and rejecting Him.

How many of us -when breaking the covenant or not accepting it - know the penalty is death?