Favoritism has been around since Adam and Eve were kicked out of The Garden.  It is a fertile breeding ground for entitlement, narcissism, dictatorship, selfishness, jealousy, manipulation, and other unChristlike behavior.  Throughout Scripture, historical documents, we read the accounts of favoritism and its consequences.  Producing a ripple which is carried down through many generations causing so much division, bitterness, hurt, loss.  Wars are created because of it.

One of the best things about our Abba is He doesn't rule with double standards and as a member of His family we enjoy knowing He:

"Doesn't play favorites; treating the little and the big alike; listening carefully to each."

It has taken a leap of faith to actually live and believe this in such a "me" obsessed world, because if I don't stand up for "me", favoritism will run me right over.  Our world seeps with favoritism.  Be it in a store, waiting in line and completely ignored, while the clerk waits on an obvious friend who just walked up.  Hearing of medical bills being written off for someone who knew someone, while one who is really struggling - continues to struggle.  Standing with a mom and listening to her heart break as she shares of her young son being bullied, and nothing is done to the bully.  Watching so many work their hardest, at school, their job, and being passed over for that award or promotion, for someone who is favored.  When watching the news,  hearing instances of injustice to the victim.  So often I would become angry and speak malice.  But never face to face to the person.

I would do anything to avoid confrontation because of fear.

Now, I know God is our defender and He has removed from me the fear and vengeful anger.  He has taken my anger and helped me to look upon those with Love and to earnestly pray for them.  I have learned and feel - our ABBA grieves.  It breaks His heart how sin is running rampant in this world and destroying those He has made in His image.  Us.

He is front and center before each one of His.

How can we not trust Him when He says He has our back?  Why ever would we continue trying to defend ourselves, when He does that for each one of His?  He knows our heart, He knows the situations we will end up in.  It continually blows me away when I look back to what and where He has brought me.  Through all those minefields - He has brought us here to the place we are today.

No matter the situation, we have to let Him be who they see.  Who they hear. He is who holds them accountable.  We have to concentrate on our relationship "in" Him and making Disciples.  We have to see the spiritual battle for what it is and not take personal what someone may say or do.  Their actions are between them and God.  Just as ours are between Him and ourself. 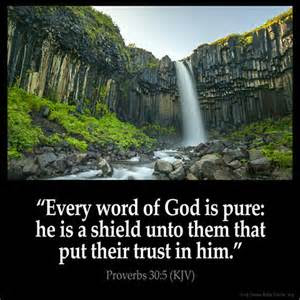