Driving away from my appointment and heading towards home, I was passing near the street of a dear friend.  Many, many years ago our ABBA placed she and her husband into our lives and they became our surrogate parents/grandparents. It has been nine years since he has passed away and I am guilty of letting too much time pass in between visits.

There was the pull between continuing towards my home or turning down the street towards hers.  My "to do" list was shouting, trying to drown out the whisper of The Holy Spirit, "What if she were to die.  Would you regret not stopping and spending time with her?  Time gone can not be brought back to spend."

As usual her smile from seeing me was brighter than the sunshine.  It seemed I was bending down lower to envelope her into a hug, her kisses bathing my face.  She never let go of my hand as she led me to the couch.  Her eyes drinking in my face.

How delighted she was to see me.  Me.

I kidnapped her and took her to lunch.  When taking her back to her door, she exclaimed, as she had throughout our time, "what a wonderful day I am having being with you".

It was such a simple task.  It didn't entail over a few hours.  But how it filled my heart.

Time.  That is all so many persons want in the living of life.

And how selfish we are with ours.
And how often we don't heed the urging of The Holy Spirit and miss out.
On time well spent gaining treasure.
On time we shall never receive back.

While reading today, it states how David went to such great lengths in preparing the materials Solomon needed to build The Temple. He did it not for the bragging rights that his family was the one, but he did it for the glory of God.  His excitement over his task seeps through the words. God brought to my mind the many (many) times He has excitedly prepared me for His work, down to the smallest detail, and instead of jumping on board -


wanting only the best for us.
Preparing everything we need.
Knowing ourselves better than we do.
Having on hand, ready to bestow,  the blessings that will touch our heart.

And we will greet Him with, "later ABBA".

Each time we come up with such lame excuses when He shares with us what He wants us to do:

"I don't know the right words to say"
"they don't want to have me around"
"I'm tired"
"I'll look really dumb and embarrass you"
"my to do list is the priority"
.

And He reminds us yet again.

It isn't by chance He has us planted where we are, how we are, who we are with.
It is all part of His design.

And He has "prepared" each one of us.

Just as David was preparing Solomon to build the temple, He has/is preparing us for work in building The Kingdom Come.

How selfish we are in the times when we decide "my way" is more important.
Our body is His temple.
He has supplied us with the knowledge of salvation, opportunities to share it, and we have audacity to say, "later ABBA".

Who do we think we are to answer The Lord in such a way?
Having total disregard to Who He is.
He who is the great "I AM".

I know in all the times I have jumped up in excitement and began to "build",  I have received more blessings than I can ever acknowledge. It is during these times of serving "Him" instead of "self" I find I am truly living.

Continually I am praying, no matter the situation - in faith I will "get to work".
To stop responding to Him with, "Later ABBA".
For that is when my treasure chest within my heart is filled up with precious memories made. 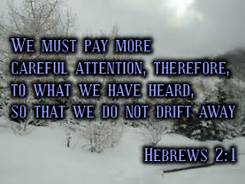