It was about four years ago I first got to know this young man. It was through wrestling. A good looking kid, red hair, beautiful eyes and a grin that made you forget why you were exasperated at him. A kid with so much potential. A kid with a heart that was lost and lead him down the wrong paths at times. This was a kid who helped my Nichalas with his wrestling techniques. This was a kid who answered my many questions about the sport. This was a kid who made it into the championship, but didn't perform topnotch because of some lifestyle choices that robbed him of his physical performance. This was a kid that my heart went out to, he was one of the "underdogs" that I could see had so much going for him, if he would only grab hold of that brass ring and not let go. A kid that had so many in his corner. A kid that I grew to love. A kid that my heart would cry when he won, achieved so much, or was injured or lost a match, when he was frustrated or angry. This was also a kid that became a friend.

Kelley graduated this past May. He was looking forward to tomorrows.

"Kelley John Walker and his passenger, Evan Scott Laws, were pronounced dead at the scene about 10:30 a.m. Thursday."

I cry as I think about Kelley. I cry as I remember him raising his arms above his head and stretching them as he tried to get more air into his lungs during a match. I cry as I think about his last moments on Wednesday night, "the 1985 Buick was southbound when it went off the right side of the road, struck a guardrail, became airborne and struck a tree. The car came to rest on its top in Durgen's Creek. Where the car landed is not readily visible from the road." I cry as I think about some of his choices and pray that he came to know our Lord.

I cry as I think about his dad, John, "had been driving along US 61 hunting for the vehicle when he spotted it in the creek bed Thursday morning."

I cry as I realize again how quickly life can be gone. How close to home this death is.

FYI - somehow, someone, has taken over my blog.

The first indication that I was no longer in control - the ablility to leave comments was no more. Since I was unable to fix the problem, I deleted the entire blog.

After receiving two e-mails (THANK YOU) and checking it out - I have found that Fabulous Fun Fridays should be called the Phoenix. It not only has resurrected itself, but obviously had a prob with it's original name.

i haven't been able to blog as of late. hormones, too busy, too --- just blank. but, i still like to read.

sometimes what i read makes me sad - that there is so much anger, so much evil, so much yelck in this world. but then, God takes my hand and leads me beside the still waters. He restores my soul.

even though we have yet to meet face to face, we have met heart to heart through Christ. even though our e-mails are few and far between, daily our thoughts and prayers lift each other up to Him. it has been through the Lord that i was able to feel connected to this precious sister. to be able to open up and vent, to just be me. and how she showered me with so much love. i am so blown away that she not only has opened up her home to me but even more so, her heart.

Valerie Suzanne, I will so miss the inspiration your words have given me. Please do not give up on that book.
Posted by deby at 9:10 PM 1 comment:

http://fabulousfunfridays.blogspot.com/
Posted by deby at 11:39 AM No comments:

http://fabulousfunfridays.blogspot.com/
Posted by deby at 10:24 AM No comments:

Just think, this could happen to you. 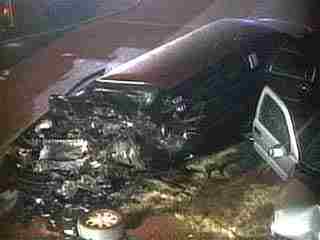 MINEOLA, N.Y. - Two days after 7-year-old flower girl Kate Flynn died in a wedding limousine struck by an allegedly drunken driver, her grieving mother described how she cradled her daughter's severed head as others were rescued from the carnage. "As I crawled out of the car, the only thing that was left of Kate was her head," Jennifer Flynn said Monday from a lectern at Winthrop University Hospital.

"And I took her -- just that -- and sat on the side of the Meadowbrook (Parkway) and watched the horrendousness going on around me. I sat there for about an hour with her as they cut my entire family out of this crushed tin can that we survived."

Flynn's remarks, intended to emphasize the consequences of drunken driving, were met with stunned silence from reporters, photographers and TV camera crews. State police confirmed that the little girl was decapitated in the crash.

Flynn, who has been released from the hospital, was riding in the limo with four other family members after her sister's wedding.

Still being hospitalized are Flynn's parents, Chris Tangney, 58, and Denise Tangney, 55, in critical but stable condition; her other daughter, Grace Flynn, 5, who is under observation; and her husband, Neil Flynn, in stable condition.

Grace and Kate were flower girls at their aunt's wedding at a country club in Bayville. The Flynns also have two sons.

Flynn's mother is running for a city council seat in Long Beach and her brother, Michael Tangney, is a Long Beach police lieutenant.

Police alleged that Martin Heidgen drove the wrong way on the southbound Meadowbrook Parkway when his pickup truck crashed into the limousine around 2 a.m. Saturday.

Heidgen, who suffered a fractured ankle, moved to Valley Stream from Little Rock, Ark., in 2004 after landing a job at a Wall Street financial company. He was arraigned Sunday and charged with two counts of second-degree manslaughter and driving while intoxicated, and held without bail at the Nassau County jail. He was ordered to return to court on Thursday.

"Horrible, Horrible," his mother, Margot Heidgen, of Valley Stream told The New York Times. "My heart is broken for them and for everybody. It's a tragedy."

Flynn said she decided to speak to reporters after reading newspaper accounts of the crash.

"Reading in the paper again yesterday that someone's in stable condition or in critical condition but they're expected to make it, it's so much more than that," she said.

"Drunk driving did this to us," Flynn said. "I don't want people to think this was a car accident. It was so much more ... Kate was stolen from us. ... But the life that she led -- and I want people to know this too -- was fabulous ... But she was taken, and it was taken with drunk driving."

"Our family has been torn apart," said Flynn. "We need prayers and we need to be left alone."
Posted by deby at 9:23 AM 3 comments:

http://fabulousfunfridays.blogspot.com/
Posted by deby at 1:30 PM No comments:

Right in the middle of my soap opera, too. 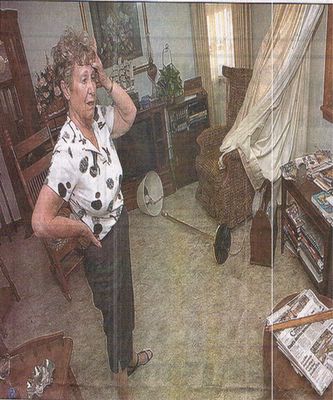 Mary Nelson, still shaken after a deer jumped through a small living room window of her home Tuesday afternoon, surveys the damage as she recounts what happened. "I was sitting right here watching TV when it came in. I heard this explosion. Next thing I knew, a deer was in my living room," Nelson said. "It rammed the wall and then went into the bedroom, tore it up and went into the other bedroom and made a mess of it, too." The deer eventually exited through a bedroom window.
Posted by deby at 10:21 AM 6 comments: