Next Jesus was taken into the wild by the Spirit for the Test. The Devil was ready to give it. Jesus prepared for the Test by fasting forty days and forty nights. That left him, of course, in a state of extreme hunger, which the Devil took advantage of in the first test: “Since you are God’s Son, speak the word that will turn these stones into loaves of bread.” 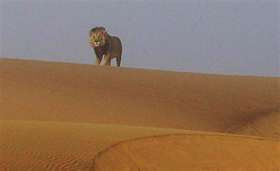 Jesus answered by quoting Deuteronomy: “It takes more than bread to stay alive. It takes a steady stream of words from God’s mouth.”
(Matthew 4:1-3)


I was "chewing" on today's reading while running errands.  I feel this is probably the strongest example of how essential it is to utilize God's Word in all of the Bible.  Christ didn't bring out a sword, or order His army of angels to win over satan - He simply used God's Word.

Just as Christ was in the desert, so are we.  As we proceed in our journey through this wasteland called "the world" onto our home in Heaven, we too are often in a state of extreme hunger and exhaustion.  We are made in His image.  He created us to have one on one communication and life with Him.  I don't know if I would have done exactly what Eve did, probably.  But, it caused His perfect plan to change.  Death and separation came into the world.  And also a void.  A void that only He can fill.  Without Him as the center of our life, we are going through the motions of living while in extreme hunger.  I have been reading through His Word every year since 1998. It shames me that even though I am in His Word almost every single day, I still let self be my god.

Times when I decide my words are smarter, cause more pain.  When I feel life isn't fair - which often it is not - and take up my words in revenge.  Three different times in the scriptures today satan tempted Christ.  And each time He quoted God's Word.  Each time.  Not a sermon - just a verse.  Just a fact.  Just truth.  It was all about God.  Nothing about Himself, His own glory.  All about His Father - my Father.  The many times God doesn't make sense I have learned to not wonder "why", but to just "do it" His way.  When we are at our weakest - He is at "our" strongest.  Rely on Him, not self.

Again, all that Jesus used to fight back was God's Word.  How well do I "know" it?  How much of it is tucked into my heart at the ready?  How often do I fight back with it?  satan/self like to fool us into believing that when we are at our weakest - we are the most vulnerable.  And satan is there, like a lion on the prowl, watching, waiting, knowing that we will become weak from hunger of not being fed by God's Word.  He will and does attack.   Because when you are His, satan never has you out of his sites.

But, neither does God.  The one that is in control.  All knowing, all powerful.  Already won.  That's my Daddy.  The one who sent a personal love letter to me called the Bible.

The love letter with the "secret code" to fight the battles while in the desert and to come out on the winning side.
Posted by deby at 12:14 PM