"But he had Jesus whipped, and then handed over for crucifixion.


The soldiers assigned to the governor took Jesus into the governor's palace and got the entire brigade together for some fun.
They stripped Him and dressed Him in a red toga.
They plaited a crown from branches of a thorn bush and set it on His head.
They put a stick in His right hand for a scepter.
Then they knelt before Him in mocking reverence: "Bravo, King of the Jews!" they said. "Bravo!"
Then they spit on Him
and hit Him on the head with the stick.
When they had had their fun, they took off the toga and put His own clothes back on Him. Then they proceeded out to The Crucifixion.
Along the way they came on a man from Cyrene named Simon and made him carry Jesus' cross.
Arriving at Golgotha, the place they call "Skull Hill," they offered Him a mild painkiller (a mixture of wine and myrrh), but when He tasted it He wouldn't drink it.
After they had finished nailing Him to the cross and were waiting for Him to die, they whiled away the time by throwing dice for His clothes.  Above His head they had posted the criminal charge against Him: THIS IS JESUS, THE KING OF THE JEWS.   Along with Him, they also crucified two criminals, one to His right, the other to His left. 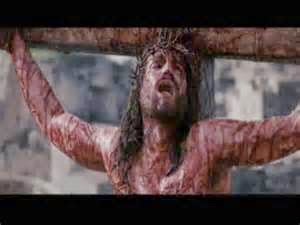 People passing along the road jeered, shaking their heads in mock lament:  "You bragged that You could tear down the Temple and then rebuild it in three days - so show us Your stuff! Save Yourself! If You're really God's Son, come down from That Cross!"
The high priests, along with the religion scholars and leaders, were right there mixing it up with the rest of them, having a great time poking fun at Him:  "He saved others - He can't save Himself! King of Israel, is He? Then let Him get down from That Cross. We'll all become believers then!  He was so sure of God - well, let Him rescue His 'Son' now - if He wants Him! He did claim to be God's Son, didn't He?"
Even the two criminals crucified next to Him joined in the mockery.
From noon to three, the whole earth was dark.
Around mid-afternoon Jesus groaned out of the depths, crying loudly, "Eli, Eli, lama sabachthani?" which means, "My God, my God, why have You abandoned Me?"
Some bystanders who heard Him said, "He's calling for Elijah."
One of them ran and got a sponge soaked in sour wine and lifted it on a stick so He could drink.         The others joked, "Don't be in such a hurry. Let's see if Elijah comes and saves Him."
But Jesus, again crying out loudly, breathed His last.
At that moment, the Temple curtain was ripped in two, top to bottom."(27:26-51)
I pray as you read these words they hit home in your heart.
Our Savior was put upon The Cross as the ultimate sacrifice for all of our sins.  His purpose was to remove the Temple Curtain, which separated us from our ABBA, so we may have an intimate relationship with Him.  The Creator of all.  ABBA.
His greatest desire is for us to be with Him.
"He was so sure of God - well, let Him rescue His 'Son' now - if He wants Him!"(43)
I can only imagine the restraint our ABBA had to not reach down and remove His precious, pure and Holy Son from this death.  From the torture of being separated from each other.
His restraint because of His great Love for you.  for me.  for all.
This isn't a story.  It isn't a myth.  This happened.  Recorded in His Word and numerous other accounts, by persons who were eye witnesses.
Jesus.  No greater LOVE. 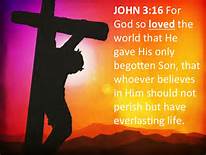