“You’ve been given insight into God’s Kingdom—you know how it works.

But to those who can’t see it yet, everything comes in stories, creating readiness, nudging them toward receptive insight. These are people—


Whose eyes are open but don’t see a thing,
Whose ears are open but don’t understand a word,
Who avoid making an about-face and getting forgiven.”
He continued, “Do you see how this story works? All my stories work this way.
“The farmer plants The Word.

Some people are like the seed that falls on the hardened soil of the road.
No sooner do they hear The Word than Satan snatches away what has been planted in them.

“And some are like the seed that lands in the gravel.
When they first hear The Word, they respond with great enthusiasm.
But there is such shallow soil of character that when the emotions wear off and some difficulty arrives, there is nothing to show for it.

“But the seed planted in the good earth represents those who hear The Word,
embrace it,
and produce a harvest beyond their wildest dreams.”(4:11-20) 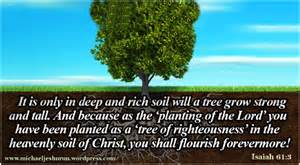