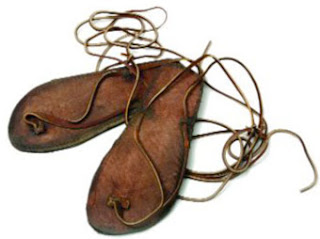 Notice that "God saw that he had stopped to look".  God didn't go over and turn his head - making him look.  He didn't put the bush right in his path to stop him.  He didn't go over and yank him to the bush.  He was there.  He was ready.  He  watched.  He waited.  He "saw that he had stopped to look".
Ever wonder how often you walk right by "the burning bush" that God placed for you?  How you become so immune to God, taking Him for granted, that you don't see, hear, feel Him?  How we become so wrapped up in self, the things of this world, that we don't see the gifts He is handing out to us?  Or to be in such denial that He is "I AM" , that we don't hear or accept His accountability, His discipline?

Used to be that I would be so wrapped up in "self",  in such a "pity party" or so consumed with anger, bitterness, thoughts of revenge - I missed His numerous blessings - in all situations.  Too numerous to count and I wonder how is it that I missed them.  Didn't acknowledge them.  Much less enjoy them.

That I didn't see the "silver lining in the clouds".

Or His Hand at work when I thought all was out of control or against me.

It is because I have made it a priority to be in His Word each and every day.  To do more than skim the verses, as an act of habit, but to consume them and chew on them.  To blog about His Words that He has spoken through to me.  And during this new way of life - He has come in and transformed my heart, my mind, my vision - me.

I love the story of forgiveness here with Moses for killing the Egyptian.  It didn't come from his own people - his family - or from the Pharaoh.  So he ran.  He ran into the wilderness and there God gave him a new family and a new life.  He gave Him the gift of forgiveness from Him at the burning bush.  He allowed Moses to stand on His Holy Ground.  In order to do so, Moses had to remove his sandals.  To accept God's terms to be able to move closer and stand before Him.

Up to this point, I wonder if Moses ever thought about if God forgave him?  If the sin he had committed, was it too big for God to forgive.   Did he become so consumed with his new life that he "forgot" or buried it deep, pretending all was okay?  How often have I done that?  In the past it was the only way I knew how "to survive" - it was my "self preservation".  And then He showed me through His Word, His family, His love - that what I was doing wasn't burying - or surviving.  It was hiding me - the me who He created me to be.  I was so often like Moses, using some excuse or believing the lies,  that I couldn't be a vessel for Him because of my flaws.  I had not confessed them, repented from them, forgave myself of them.  In doing so, I still was wearing my sandals of sin.   Putting myself before God.  Believing that His gift of forgiveness through Christ wasn't enough.  Even after confessing and repenting - if I couldn't forgive me - then how could He.

Including my sins.  One of those being that I hadn't forgiven me.

UNTIL.   UNTIL.  His Word, His Godly Wisdom,  transformed my heart so that now I see and love myself as He does.

"He who gets wisdom loves his own soul; He who keeps understanding will find good."  (Proverbs 19:8)

As He did with Moses.

But first, I had to do as Moses -  I had to remove the sandals of sin to accept the gift of Him.

Well, my dear Deby, another excellent post! Interesting points to ponder about Moses' thoughts on forgiveness, and recognizing God's glorious presence in the moments of our lives!
I think we would each be utterly astonished if we realized just how much of the Lord we miss throughout the day. May our eyes be open to His awesome presence!
Blessings to you ~ Mary

Thanks Mary! I am finding that focusing on "His burning bush" enables me to be thankful in all things.

Thanks for sharing this post. I love the way that you expounded on this verse - great points!

Thanks Victory - loved your words in Doing you Well Wednesday - Letting go. Hope and encouragement!