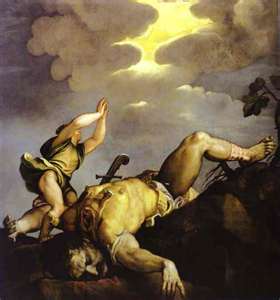 How much David loved God.  I had never really thought much of  how his world was turned upside down in such a short time.  He went from being the "runt" son, the shepherd boy to a warrior and son-in-law of the king.  From being out in the wilderness, alone for long amounts of time, to being anointed king, to being in the company of armies, royalty.  He went from fighting bears and lions to killing men.

I doubt in his wildest dreams did he ever envision his life becoming as it did.  Or that he himself would be a king.

Throughout it all though, he loved -  loved God.

In telling Saul of killing the lion and bear, I don't feel he was bragging.  He was protecting his sheep, even laying his own life down.   Just as he was protecting the name of God.  David loved deeply.  Sometimes, I get so caught up in the story of David I miss out on the emotional side of him, until I get into the Psalms.  Reading of all the warfare causes me to forget he was a man of great compassion and love.  He was just wanting to bring honor to God and getting caught up in the drama of life.

Saul was a crazy man and David still gave him honor because he knew Saul was one of God's chosen.  It takes a great man to not take things personal - spears being thrown at you -  and stay focused on God.  What an example for me to carry in my heart as I go forth and come up against giants or spears.  It helps to put things in perspective in a big way.....I mean really how many nine foot men do I come up against, or a "friend" throwing spears at me?  Don't get me wrong - I'm not saying some of the things we have to deal with in our lives aren't just as serious - but we sometimes take every single thing and make it into a big deal.  Mountains out of molehills.  Through it all - David drew strength and stood firm in knowing that God was his Dependable Love.
Am I as David.

The part of this account which stands out to me the most was Jonathan.  This was probably one of the first times David had felt this overwhelmed with life and God blessed him with a friendship.  It doesn't seem as though David received much support from his brothers, his father called him the "runt", he had a wife who loved him, a father-in-law that did/didn't.

I am so thankful my "Jonathan" is my husband, Curt. He has been with me to face giants for almost 33 years and I pray daily for a minimum of another 50.  It took a number of years for our walks to have finally come together as one in Him.  We were talking about this the other morning and realized it began to happen when Curt started reading his Bible almost every day.  He said when he misses a day his mood, outlook and everything is out of sorts.  I pray people will come to know how essential His Word is.  The "Blogging through The Word" isn't about getting numbers for me - it's about teaching and reaching others one by one, as Paul did in his ministry.  It is so amazing what the ripple effect is for one person.  Can you imagine how the world would be changed if we were all in His Word?

I pray people will come to know how essential it is to have His Word implanted within our hearts.  our souls. our minds.

To face and overcome the giants and the spears with Him. To stand firm in Knowing His promises.
Posted by deby at 7:16 AM