Throughout the readings of Judges, I have not enjoyed it.  There has been such ugliness.   I have such incredible sorrow in how people are outside of God.  So many of the verses seem to ring true of today.  I wasn't hearing what He wanted me to know.  My focus was about the status of the people, their sins, the way the world was.  The mistreatment of the women, the way people would "bend" the laws to suit their desires, how they would make a vow and change things up so they wouldn't lose face.  And again, I am reminded of how we humans really haven't come that far over the years.
I was only focusing on the discouraging status of today's world.

This past Friday night as we were driving home,  the moon was absolutely beautiful.  Hanging up there, it seemed larger than normal, so bright it almost hurt your eyes to look at it.  And yet you couldn't take your eyes away from it.

This man who looked up at this same moon as I was - how so very much He loves me.
He prayed knowing His Daddy was going to separate Himself from Him - just for me.  The heartbreak they were going through in that garden.  This man who made the choice to make a necessary separation from His Father until He arose from the grave - so I may be with Him for always.  For all who chose to take Him as their Savior.

The King of Kings.  My Savior. 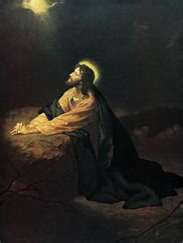 He wants me to focus not on the hopelessness of sin, but on the Hope of Him.
He took all the ugliness of us in sin and transformed us into His Beautiful.
No greater Love.
Posted by deby at 6:01 AM