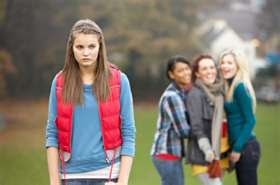 I was never part of the "in" crowd.  There are many memories tucked away of enduring the "joys" of being made fun of, not included and even bullied.  Until the past few years, I still allowed "bullies" to intimidate me.  To fall back into believing what they saw or said about me was truth.   God has  opened my eyes, not only to myself and how He sees me, but also to those who used to intimidate me. I stress "used to".

Some days there are moments which bring up memories I had buried deep. Not deep enough obviously. In trying to fill a void, to fit in, I have done many things I am so ashamed of. Thankfully, God reminds me I haven't been that person for over 30 years and our Savior's death on The Cross has covered me in His Grace and Mercy.  In Forgiveness.  Through His Blood I have been made new.  I have been - Redeemed.

In the past,  all I wanted was to be included with those who treated me as an outsider. Now - I don't care. It is because He has filled the void and I am His "misfit".  He has blessed my life and given me so many treasures - Curt, Adam, Nichalas, and Amber to name a few. My life is very rich and very full. He has surrounded me with those I love and am loved back. Those whom I am able to be myself, accepted and know I truly belong in His wonderful family of "misfits"! There aren't enough words to express how very much I love this "family" He has blessed me with. And every day He introduces me to more siblings. How great is our Daddy!

The best part is I am still a misfit in this world.  Throughout Scripture,  I look at the people Christ surrounded Himself with and they were mostly the same as the band David had surrounded himself with. Losers and vagrants and misfits of all sorts.  I see now,  being a misfit was actually the best thing that could have happened to me.