We haven't gotten the newspaper for a few years now.  I missed it.

I try to check the obituaries somewhat regularly.  My heart is hurting.  I missed it.

A little over 30 years ago I met him.  Our relationship began when he was a client at the bank I worked at and it was usually me who waited on him.  He and his wife, Ann,  didn't make it to our wedding, but I remember getting a package in the mail with a card from the heart.  There was a day years later, we had moved back from Texas and started our business, I was working in a yard and saw him across the street mowing at his own home.  He waved at me and I waved back.  This pattern continued for a few months, until one day I walked across the street and said hello.  He hadn't a clue who I was until I smiled and he said my name before I could.  He ushered me inside, dirt and all, to meet his "bride", whom I had heard much about in the previous years when we would see each other regularly.  We sat and caught up a bit before I headed back to complete my day.  He began to use our services each fall to clean up his large lawn.  Each and every time he called, he said how great it was to catch up and how he was looking forward to seeing us.

And I missed it.  This past week he died.  His visitation was Sunday and the funeral Monday.

I thought about what I was doing on those days, and realized he would be happy knowing I was out "living" life.  I knew he would understand, as well as his bride, my missing the opportunity to give my condolences.

I also missed taking them up on their offer of getting together more often.  I missed sharing more moments with him.

The one thing I didn't miss.

I thought about what our "connection" has been and is, and am thankful it is our ABBA.  From the very beginning in meeting him, even though at the time I didn't recognize it, he was a warrior for our ABBA.  This man and his bride have a passion and love for their ABBA.  And the connection of our ABBA made us family.  Always picking up where we left off.  No matter the amount of time between.  And always our conversations including the sharing of our love for our ABBA.

Although my heart is heavy, knowing this is the first fall of waiting before Heaven to see Ken greet me with his beautiful smile and twinkle in his eye, Christ fills my hurting heart with His Words of encouragement.  His Promise.  Our hope in Him.

"Staying with it - that's what God requires. Stay with it to the end. You won't be sorry, and you'll be saved.(13)
"Following those hard times, Sun will fade out, moon cloud over, Stars fall out of the sky, cosmic powers tremble.
"Then, The Arrival of The Son of Man! It will fill the skies - no one will miss it. Unready people all over the world, outsiders to the splendor and power, will raise a huge lament as they watch The Son of Man blazing out of Heaven.
At that same moment, He'll dispatch His angels with a trumpet-blast summons, pulling in God's chosen from the four winds, from pole to pole.(29-31)
My dear friend and brother Ken, how thankful I am ABBA used you  to draw me closer to Him.
We are one day closer to Heaven.  Eternity with Him. 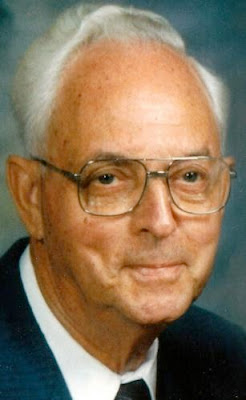 Born August 27, 1925 in Augusta, Missouri, Doc was the son of Reinhold and Lorene Nadler Knoernschild.  He married Ann M. Fuerman on June 21, 1953 in St. Paul Lutheran Church in New Melle, Missouri.  She survives.

Dr. Knoernschild served his country as a Radioman First Class in the U. S. Navy during WW II. In 2013, Doc was honored to be chosen to go on a Great River Honor Flight trip to Washington.

Faith and his church were very important to Doc. He was a member of Our Redeemer Lutheran Church where he served in various offices, including Chairman of the Congregation.  An avid outdoorsman, he enjoyed Quail hunting, fishing, and working in his yard and tending his flower garden. He was a member of Cedar Crest Country Club where he loved to play golf and cards. Doc was honored with a Life Membership to Cedar Crest. He loved playing cards with his friends and family and will be remembered as a great storyteller.

A 1943 graduate of Francis Howell High School in Harvester, Missouri, Doc earned his Bachelors of Science Degree in Agriculture from the University of Missouri and his Doctor of Veterinary Medicine Degree on June 7, 1953. Doc practiced Veterinary Medicine in Quincy and Adams County as a partner with the Adams County Veterinary Clinic and later with the Knoernschild & Koch Veterinary Clinic from 1953 to June 30, 1990. His practice  consisted of both farm animals and small pets.

Dr. Knoernschild was preceded in death by his parents; two brothers in law; and two sisters in law.

Funeral services will be held Monday morning at 10:00 in Our Redeemer Lutheran Church with the Rev. Martin Eden officiating.  Burial with Military Honors by Quincy American Legion Post 37 and the U.S. Navy Funeral Honors Detail will be in Sunset Cemetery in Quincy.

Visitation will be Sunday evening from 4:00 to 7:00 at the Zehender Robinson Stormer Cookson Funeral Home and Monday morning from 9:00 until the time of services at Our Redeemer Lutheran Church.

Memorials may be made to Our Redeemer Lutheran Church or the Great River Honor Flight.
Posted by deby at 6:31 AM