Sitting here, getting ready to leave.  Knowing we won't see two of our kids for quite a few months.  Five at the earliest. 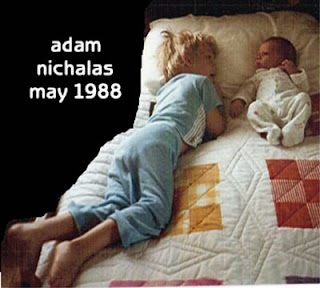 When I look at my life, Adam and Nichalas are definitely the best part of what I have ever produced.  It wasn't me - it was God who had His hand in it all and how they turned out as they have.

How He took me - one who was of sin, who walked outside of Him for so many years.  He took my stumbling blocks and made them into His stepping stones.  I stand amazed that our sons walk in Him - only because of His grace and mercy.

It has been hard every season, as they have grown up, to let them go.  It has been an adjustment, to say the least, of what and how my role has changed over the years.  Due to my past, I had such a void in my heart for love.  Until I became a mom - I had never experienced such a gift.  To have one look at me in delight (most times), to need me in the ways they did, that fulfilled my life and heart.  I was gaining my worth from them.  I was also putting them over Curt.  And our marriage was falling apart because of that.

Thankfully, God showed me my sin and I repented of that, before I lost "my Curt".  In holding back the offering of the boys to God, I was sinning.  I was walking in guilt.  I was making them my idol.  I was putting my self, my needs - before Him.  I was desecrating the best part of me.

And I was fooling myself - they weren't mine.  They still aren't.  They are His.

I am just the vessel He chose to raise them.

His Word has showered blessings upon me that are too many to count.  His Word has helped me recognize where I need to grow, where I have, and what my fruits are.

My fruits are many.  Two of them have become three.  Nichalas' bride - our Amber - she too walks in Him.  Only because of how our Abba brought them up, is how Nichalas has picked one in Him.  His Word is His guideline and measuring stick - as it also is Adam's.

Not much greater joy than celebrating and walking together in Him this family of five I belong to.  This family that made it through the trials and tribulations.

This family that He has used and continues to use for His Glory! 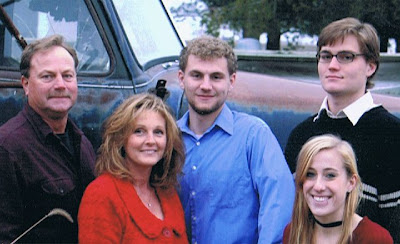 Because we are His.

Deby , you have a beautiful family! I'm so thankful for God's forgiveness and redemptive work in our lives... 'Because we are His'.
May God richly bless you as you continue to do life with your family and with our Lord.
Blessings and love ~ Mary

Thank you Mary - God so very much blesses!