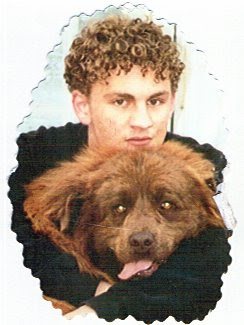 A number of years ago I was sitting on the couch and looked up to see Curt holding Adam in his arms, there in the doorway.  Adam was laying limp and Curt's face was covered with tears, everything about him was showing the fear he had.

He gently laid him on the couch.  Adam was aware of all that was going on, talking to us, his body unhurt.  Looking back now, I think he was so frightened by Curt's reaction he remained calm.

I have never doubted if Curt loves his sons.  This is one moment which stands out just how much.  He had lost two brothers early on in his life, and the fear of losing one of his sons has never been far from his mind.   Death has a way of touching us and leaving its mark.


I hope this description makes sense.  There wasn't a logical explanation when looking at the tracks on his coat.  This wasn't the first time ABBA stepped in and preformed a miracle with our Adam.