“You are his son and have known all this, yet you’re as arrogant as he ever was. Look at you, setting yourself up in competition against the Master of heaven!" (5:22)

I can remember a couple of years ago watching the TV in disbelief, sadness in my heart, the flames shooting high into the night sky. Embers of various sizes were floating through the sky, remnants of a magnificent building. Because it was declared unfit, the firemen were unable to fight the fire from within. The Newcomb Hotel was declared a total loss around 11pm. All further efforts toward the fire were aimed towards neighboring buildings. With the winds picking up, there was a strong possibility, they also, could catch on fire. The next morning, it was still smoldering, no one was injured, the other buildings were safe, and the cause of the fire was under investigation, listed as "suspicious". They doubted if they would be able to determine the cause, due to the excessive damage.

The Newcomb Hotel was built in 1888 and when opened in 1889, it was considered one of the premier luxury hotels of the Midwest.  There are, and have been so many beautiful examples of architecture and design, in the city of Quincy, Il.  It is known for its beauty of not only buildings, but also for its trees.  And each time some of this beauty is removed, my heart is saddened.

It isn't because I am in worship of the "things" I am saddened, it is the history, the stories they could speak of if they were able to talk.   I imagine the people and events which occurred within and about them.  How much we neglect to write down, so it is not forgotten, because all things will pass away.

The Newcomb Hotel had sat empty for 30 years and during that time, many attempts to develop it had fallen through, either due to funding, legislation, or plain ole politics.  Even though there were some windows boarded up, building materials could be seen sitting unused through the huge windows - you could still see a glimpse of its former glory.

It was thousands of years ago when ABBA created Adam, the first man.  Created him in His image, designed perfectly, for all His glory.  Just as He has designed each and every person since. 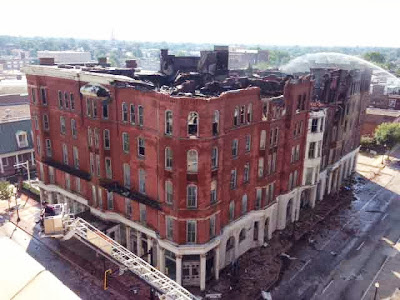 He created us with so many gifts, talents, and such beauty.

Yet, how often are we "sitting there empty", with boarded up windows, His construction tools in complete view -  sitting there unused?

How often do we try to cover up His glory with our own destruction?

How often do we become arrogant in the world's way of living our own lives, only to become a danger to ourselves and others?

How often do we just sit and not use the beauty of Him  -  for Him - becoming "unfit"?

"King Belshazzar held a great feast for his one thousand nobles. The wine flowed freely. Belshazzar, heady with the wine, ordered that the gold and silver chalices his father Nebuchadnezzar had stolen from God’s Temple of Jerusalem be brought in so that he and his nobles, his wives and concubines, could drink from them." (5:1-3)

King Nebuchadnezzar walked in arrogance of self and his son, Belshazzar, followed suit.  Daily, in my walk, I am in the process of forgiveness - either for someone or even myself.  This is so hard when a person knowingly attacks me, even when I focus on Christ Words as He hung on the Cross, "Father, forgive them, they know not what they are doing".  ABBA finally revealed to me, what  those persons do not know is the consequences they are creating and how the "ripple" will carry on.  It is enabling me to forgive everyone.  Yes, finally, everyone - for they really do not know what they are doing.   ABBA is giving me strength to do this as an example for our sons and daughter to see, to pass on.

He has humbled me in my arrogance of not forgiving.  He has helped me to break the cycle.  I am so often in awe of the hearts of our children.  How they love like Him.
He has opened my eyes to my arrogance when not forgiving.   Believing  I am above Him, when actually I am nothing but an empty shell of a building.  I don't want to continue living in a building which has windows shattered with pride and arrogance, filled with the scattered debris of unforgiveness, anger and bitterness, not able to withstand the fires - which will come.  To live as a building falling victim to the "elements", because I have chosen not to use The Tools He has provided my upkeep.  There is no competition - He is the Master Architect and Designer.  I pray my "building" isn't ever listed as "unfit" - for when the fires do come, I desire Him to be fighting them from within.  I desire when persons look at me, they will see my "building" is filled with His glory.

Because He resides within my "building".
Posted by deby at 5:00 AM