It was beginning to rain as I pulled up to the stop sign headed towards home.  I was reminded of a time a few years ago when the sky to the east was dark over in Missouri on a Saturday night.  I remember seeing the sheets of rain off in the distance.  I was in a dilemma - having another two hours to complete the mowing job I was on and another hour plus at another site.  A man had called asking if it were possible to mow for him until he had bought a lawnmower and his yard hadn't yet been mowed that season.  I had given him my word I would take care of his yard later that Saturday evening - before dark.  That storm blowing in hadn't been part of my plan.

My mind had wrestled over leaving to go take care of the man's lawn and coming back Sunday to finish up Huber or to continue where I was.  I can remember praying over what to do and hearing His instruction, "Stay and finish".  The drops of rain began to fall as I loaded up my mower and I was so thankful ABBA had held off the storm long enough for me to complete my mowing at Huber's.  It was at this same stop sign, where I head right to go home, I instantly felt a strong pull to continue straight.

Vaguely I could see them a short distance ahead, right after the start of 8th street.  Two persons, huddled together along the side of the road, bracing themselves against the wind.  Struggling to try and pull their hoods up over their heads.

I heard Him say, "They are your Divine Appointment, give them a ride".

After they climbed in, I took off and deposited them another five miles to their home.  They had decided to take a hike and gotten caught in the storm.

my ABBA needed "me" as part of His Plan.

After I arrived home, the skies had opened up and the rains beat down.  I was sharing with Curt how ABBA had used me and said, "they would have never made it to their home before this".

Later when I called the man to apologize about not getting to his lawn, he wasn't at all upset.  Tuesday would be soon enough.
That day is just one more reminder not to forget how much I love He has given us the choice to have faith and trust in Him.  To lean on Him during the dance of storms in life we will and do get caught in.  We need only to listen and follow His lead.  We can each be His vessel for the needs of others and accept others to be His vessel for ours.

How much I love that nothing is a coincidence.
That all is in a perfectly timed dance.
That our ABBA is always in control. 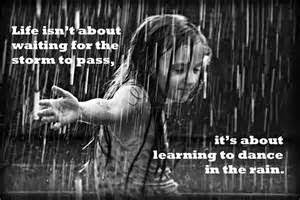