"When Delilah realized that he had told her his secret, she sent for the Philistine tyrants, telling them, “Come quickly—this time he’s told me the truth.” They came, bringing the bribe money." (16:18)

Last evening it was almost 8pm as we stood in the shop.  We had put in a full day of work and still not time to call it quits.  I stood before Curt as he was telling me about the clutch that had went out on one of our mowers earlier in the day.  Thankfully, they had a new one at the store and it was now installed.  All we had left to do was load up the trailer and ready everything for today.

While listening, I was also thanking our ABBA for this man of many gifts and talents.  My partner in all the roles of this life.  My heart leaped when my eyes caught his wedding ring on his left hand.  A precious reminder of how much he is "My Gift" from our ABBA.  "My Gift"  whom has been more than I could ever imagine.

Most nights, the last thing I remember thanking God for is my Curt.  "My Gift".

Usually, I am holding his left hand and my fingers touch his wedding band.  There is something about him wearing that band of gold that touches my heart.  Knowing that when someone sees it on his finger, they know he is "taken". 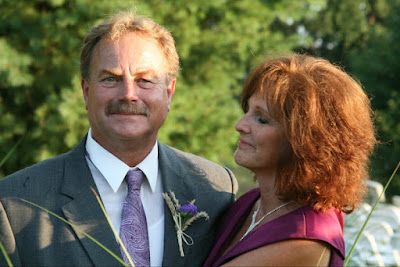 We will be celebrating 34 years together this coming June 9th, the anniversary of our first date.  In that time, we have been through many ups and downs.  Thankfully, we made it - only because of God's help.

Exactly 28 years ago, we were in a major down.  I can remember being on my knees and begging, pleading to God, that He would save our marriage, that Curt would not leave us.  I didn't know where else to turn.  Thankfully, I turned to ABBA, because He is who kept us together.  Almost 13 years ago we were in another major down.  This time it was me who wanted out.  I know  I hated our marriage and thought I even hated him.  There were such harsh and painful words I threw out at him.  Wanting only to hurt and drive him away.  But, he went down on his knees and begged to God I wouldn't leave.  He refused to let me go, as I refused to let him go, so many years prior.

He reminded me of a little rat terrier with a tight hold of my pant leg.

I recognize there are some marriages which do not make it through the lows because of ensuing circumstances.  It is with great thanksgiving to the many Scriptures telling me how God knows my heart better than I do.  He knew without a doubt, under all the hurt, anger, harsh words - my heart was head over heels in love with Curt.  Through our ABBA, His Word, prayers, counseling, friends who fought to keep us together, we made it through the many battles during our upward climb on this mountain called marriage.

Today, He has blessed our relationship in needing only the required regular maintenance, as we continue this climb which will go onward until death do us part.  I go to sleep at night, live throughout each day, so very thankful and blessed beyond words, that our Abba kept us as one.  Not only for ourselves, but for our Adam and Ashley, Nichalas and Amber, Charlie, Ella, other future grandchildren and the next generations beyond.

When I read of the relationship Samson and Delilah shared, I wonder if he was really in love with her or was it just lust?  Did he share his "secret" because he did love her or was he exasperated by her nagging?  Was there ever a moment afterwards, that Delilah regretted what she had done?  Did she realize there was something there in Samson's heart for her?  Did she ever think about what she traded in for bribe money?

How much like the relationship in a marriage is our relationship with God.  We are given "The Gift of Christ"  and reject it for the bribe money of satan.  There are some who do not want to put the vested interest or work into relationships anymore, choosing to take the easy way out.

As some do with their relationship with God.

My heart breaks when I think about the "Delilah's" of this world.

They hold in their hands "The Gift of Christ", the key to eternal life and cast it aside.

For the bribe money of satan.
Posted by deby at 7:03 AM