"The inheritance of Simeon came out of the share of Judah, because Judah's portion turned out to be more than they needed".(19:8)


Often times when I think of "inheritance", I think of wealth. It isn't in my foremost thoughts that in order to obtain an inheritance - a death has to occur. I readily recognize it usually includes property, titles or money and put on the back burner in my mind there are also rights, obligations, and oftentimes debt. Everything a person accumulated, it all becomes yours if you are the heir. It can be a blessing, a burden and sometimes both. If numerous heirs, it can divide them.

There are accounts of ones who have gained millions through the lottery and how the wealth sometimes changed lives for the worse and some it didn't change all that much.  I once read an article reporting how Bill Gates spent 1 million within 5 months on his 15 year old daughter to ready her for competing in the Winter Equestrian Festival.  At the time of the article his worth was 64 billion.

To be completely honest, I sometimes think about having a wealth like that. There are many things Curt and I have talked about in how nice it would be to do anonymously for people or organizations. Easter is coming up and I think about the joy to fly Nichalas and Amber back for the weekend so we could all be together.

If we had this type of wealth, I'd like to think we'd use it all for God's glory and not become worldly. I don't know how it would change us, but know it would. I think about our kids and what they would experience - not just the good things, also the bad. How could you ever know who your true friends are? Some persons would not feel any boundaries in regard to coming and asking/demanding money. There would be such a loss of privacy. And even safety.  There are some who would think nothing of kidnaping and holding one of us for a ransom.

There hasn't been a worldly inheritance received which has made our family wealthy in this sense, but I delight in the spiritual inheritance we have received. One which surpasses all wealth - all worldly possessions- giving unto us everything we need.

Those in Christ have received an inheritance that came at the cost of an innocent man's life.
A man who gave up His life so we may live eternally with our ABBA.
Our Savior.
Our Jesus Christ.

This world will pass - as will all the millions and billions of dollars in it. I know for some persons,  money is their god - their hope - their road to death. I do know I can not afford to fly our Nichalas and Amber in for the weekend. I do not have a million to spend on a sport our kids or grandchildren are involved in. I do not have the million or billion in our bank account.

But, what I do know - beyond any doubt - is because of our inheritance from our Savior -  we in Him have Wealth beyond our wildest dreams.

I rejoice in how His Wealth has and is changing me to be more of Him and less of me.  I so desire to use His Wealth for His Glory.  To spread it to those who are "poor" as I once was, so they may know the true blessings of His Wealth. His Wealth which is better than any wealth the world has to offer. 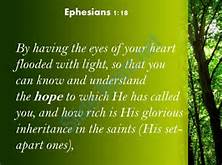