"And you'll realize that I am God.'"(13:23)
The drops of water cascaded down upon me, wetting the front of me as though I were in the shower.  I was picking crabapples this morning before the sun had a chance to dry out the trees from last nights downpour.  Crabapple pie.  Nichalas' favorite and I wanted to have them in the freezer for when they are back at Christmas.
Driving home I was looking at the corn and seeing how it is turning.  Harvest will soon be upon us.  There are more leaves littering the lawns, some of them displaying their glorious colors before they become dust.  My eyes were drawn to the bold color palettes of the flowers popped out against the green of the grass, waving their heads in the gentle morning breeze.
Everything looks so fresh and clean after the rains.
Everything brought my ABBA to mind.
I couldn't suppress a smile as I realized everything about my life constantly brings Him to my mind.

When was the moment for you?
The realization that He is God.
I have always believed there is a God.
I just never believed He was to be my God.
I believed He was here for others.
It was through the gift of Adam, I realized He found me worthy enough to entrust me with such a precious little one. He opened up my eyes to see how much He loves me through the role He gave me as a mommy. It was at the moment when I first held Adam and could count his fingers, his toes, gaze into his eyes  He blew me away in His Awesomeness in the creation of  this child who had just been in my womb.  From just a seed and egg, using my body to nourish and grow him. Amazed.
I began at that moment to realize all is in His time and His way.  He knew before time began I would be laying there in the hospital bed, holding the gift of Adam.  Nothing is by chance.

I began at that moment to live with my eyes wide open.  To bless me three times again in having the gift of a child within.  Our Nichalas and two in Heaven.  I began to look about and see the miracle of life in all of His creation.  Perhaps that it why I enjoy the job He has given me so.  Each and every day I am blown away by the beauty of His sky to the beauty of His vegetation.  His animals.  We humans. All whom are made in His image.  I love thinking about all He has created and how it works.  Each element needed.  Running in a fluid motion.
He created all from nothing.
I began at that moment to drink in His showering of Love upon me through His Son. His Word. His Family.  To grow into an intimate relationship with Him.  One that has and will continue on until I die.

I began at that moment to realize - He is The One True God.
My ABBA. 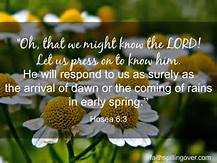