The Father is with me. I’ve told you all this so that trusting me, you will be unshakable and assured, deeply at peace. In this godless world you will continue to experience difficulties. But take heart! I’ve conquered the world.” (16:32-33)

ABBA.  Omnipresent.  He is always in control.  Everlasting.  Unconditional love.  Mine.  His.

Volcanologists from the National Park Service and the U.S. Geological Survey have predicted that the next major Yellowstone eruption would make Mt. St. Helens look like a mere geologic hiccup. The 1980 St. Helen's eruption sent 1.25 cubic miles of ash into the air; in comparison the next Yellowstone "event" could potentially produce approximately 500 times that output volume (or 625 cubic miles). Crop failures resulting from the cataclysmic event could last for years as a consequence of that much particulate and sulfur dioxide content in the air. 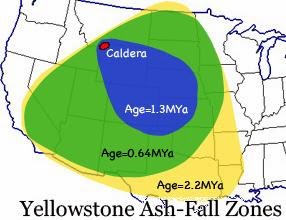 Japan's Meteorological Agency issued a 1-meter tsunami warning for a long stretch of Japan's northeastern coast. It put the magnitude of the quake at 7.1.

Our economy is taking a nosedive, health care is going to be the straw that breaks the camels back.

Gangs and drugs are overtaking our towns, cities.  Guns will be taken, bank accounts will be depleted by outside sources.

The warnings go on and on - the world is "going to hell in a hand basket".


How easy it would be to get carried away in the "tsunami" of fear, worry, panic.  Digging deeper into the articles running under the eye catching headlines, you find He is there.

Everywhere you look there are signs of the constant rumbling of the destruction of sin in this world.  Amongst those signs is also the exciting gift of hope.

His Word is God inspired and everything He is.  It is alive, solid and shoots straight from the hip.  There isn't a hidden agenda laying under the headlines, He doesn't hide behind worthless words.  He promises, "there is nothing new under the sun".  Our life here, is all about Spiritual Warfare.

His Word - His Word is Truth.

"In this godless world, we will - not might - will, encounter difficulties".

It is our choice where to place our trust.

Will it be in the lie of the "headlines" or the Words of His Truth, living life "being unshakable and assured, deeply at peace".

No matter the difficulties we will encounter.


"In today's headlines:  Old Faithful - There is no evidence that a catastrophic eruption at Yellowstone National Park (YNP) is imminent. Current geologic activity at Yellowstone has remained relatively constant since earth scientists first started monitoring some 30 years ago. Though another caldera-forming eruption is theoretically possible, it is very unlikely to occur in the next thousand or even 10,000 years."