" My God, free me from the grip of Wicked,
from the clutch of Bad and Bully.
You keep me going when times are tough—
my bedrock, God, since my childhood.
I’ve hung on You from the day of my birth,
the day You took me from the cradle;
I’ll never run out of praise." (71:4-7)


It has been difficult, throughout the years, to separate who God really is from the examples of "love" in this world.  Too many years I spent believing He loved as some of the humans - conditional, based upon performance, double standards, favoritism, even status.  Not until I started digging into His Word, did I start to see how He is just the opposite of all I was believing "love" was.

His Word has removed the "clutch" of lies which held me down in the pit of life.

There have been different times I can look back upon and see I was removing myself from those who were keeping me down.  In doing so, I was ganged up on, bullied, ostracized, made fun of, ignored, treated like an outcast.  You would have thought when their "true colors" came out, I would have seen they weren't loving as Christ loves.  Yet, I still would find myself running back into the pit.

It was scary drawing the line in the sand and not moving it.  Being in the pit was the only thing I had ever known.

I was picking up doubt and second guessing the "line" I had drawn.

Often, I would erase and move it.  Covering up the "me" He created and conforming to what "they" wanted, fooling myself I was fitting in.  Comforting myself in thinking it was better to be back in the role of being "unaccepted", because it was all I had ever known. 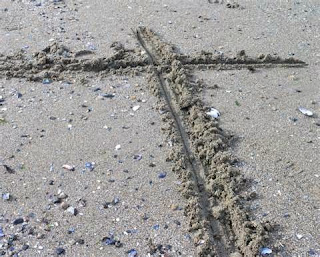 His Word has caused me to realign my vision onto Him and this time, He drew the line in the sand.  I have put my Trust and Faith in Him, no longer do I allow them to hold a power over me.  The difference now, as I stand firm "in" Him, seeing the faces of the "Bad and Bullies" and hearing their voices threaten me, is He has equipped me with His Armor.

Armor I have freely taken and learned to dress myself in, to stand firm in, and while focused on Him, I see they are retreating.

I see now, they are all wind and no blow.

His Word has also reinforced me while I stand at the line, I am not alone.  He has surrounded me with those who are "in" His Word who reaffirm whose I am.  Who reaffirm I am standing "in" and "on" His Truth.

His Word has introduced me to my Abba - one who loves unconditionally, without double standards or blatant favoritism, without being bad or a bully.

The One who loves Whose we are not who.

How I praise Him, even without knowing I was doing so, I was searching Him out since I was a child.  Even when I was searching in the pit of life, He never let go of me - for I am His anointed.  We all are.  It is our choice to accept being His or reject it.  His Word has given me the desire to choose Him.

"I’ll never run out of praise" for how He has shown and given me real love.