How wonderful, how beautiful, when brothers and sisters get along! It's like costly anointing oil flowing down head and beard, Flowing down Aaron's beard, flowing down the collar of his priestly robes.   It's like the dew on Mount Hermon flowing down the slopes of Zion. Yes, that's where God commands the blessing, ordains eternal life.(1-3)


The precious oil is being used as an illustration of "brothers dwelling together in unity."

Most of us will ask how does that make sense?

Take also for yourself the finest of spices: of flowing myrrh five hundred shekels, and of fragrant cinnamon half as much, two hundred and fifty, and of fragrant cane two hundred and fifty, and of cassia five hundred, according to the shekel of the sanctuary, and of olive oil a hin. And you shall make of these a holy anointing oil, a perfume mixture, the work of a perfumer; it shall be a holy anointing oil . . . And you shall anoint Aaron and his sons, and consecrate them, that they may minister as priests to Me. (NASB) Ex. 30:23-25, 30


The oil used to anoint Aaron was holy anointing oil.

What a picture of unity.

It is a picture of very different people, yet people who are united.

Conclusion:When these spices were mixed with oil, the oil became holy oil. It was not the oil that was holy but the mixture. By themselves the spices could not make a holy oil. God did not ask for three measurements of myrrh, but required four different spices. God could have used just one spice, but He did not do that. It is a great reminder for us that we need each other to provoke one another to love and good deeds (Heb. 10:24).

The body of Jesus Christ is made up of all types of people. (copied) 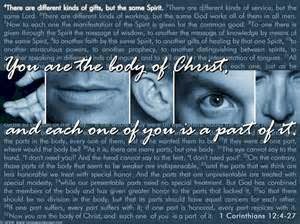