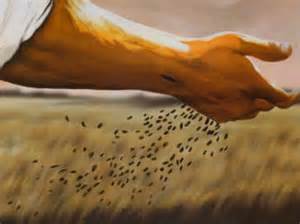 It is so easy to forget, when my heart did not have Him in it - when I lived outside of Christ - and become judgmental, impatient to those who are lost as I once was.

When I was young, I went with the flow.  Everyone was "accepting" Christ, so I did.  Most of us didn't have a clue what it really meant to have an intimate relationship with our ABBA.  We wanted to be seen as belonging to something.  To not stand out as outsider.

He grew my heart to desire that I am an outsider in this world and belong to Him.

Especially when His seed fell on rocky ground of my heart.

How thankful I am there were cracks in my heart.

How thankful I am His Word wove His way in and grew and how He transformed the rock of my heart into rich soil.  Soil He constantly using in growing seeds for Him.

Back when my heart was a rock, I wasn't interested in following Him.
Even more amazing is how He has drawn me into Him.
How I now run after Him, drink Him in.

How I am head over heels in love with Him.

I think about those in the verses Moses was referring to and am thankful He has captured me.
And that His roots run deep within me.

"They weren’t interested in following me—their hearts weren’t in it. None, except for"I am thankful to be one of the exceptions.