Hindsight is 20/20. Think about all the giants, the mountains, that have come into your path on your journey. At the time they seemed so large, there wasn't even a way to go around them, much less over them. And now when you look back, after being conquered, they lose their power of fear. Of doubt that you would make it to the other side. To the promised land.

When we visit Nichalas and Amber in Phoenix, I enjoy taking the challenge of hiking the surrounding mountains.  There is my annual one and this year Nichalas told me of another.  It was a 2-mile walk to the field surrounding the base where I could see various paths others had taken to gain access to it. One of the things I do is stay off the beaten path and try to succeed on the terrain less traveled.

There was a moment of doubt, even feeling my body freeze up when trying to scale up a particularly sheer incline.  I had gotten myself where there was a place to climb up to the top and a ground wasp started to dive bomb me, letting me know a nest was close at hand.  Upon turning around and looking down, I wasn't sure where I had climbed up.  Doubt started to seep in along with a little fear.  It was a relief when I laughed out loud during praying, at the visualization of a rescue team having to come get me off the ledge.  With our ABBA directing my steps, "we" made it off the ledge and onto another point to reach the mountaintop.

During my climb there were times when I had to stop and rest. It caused me anguish that my body was so out of shape and yet at the same time amazed it had covered the terrain laying below me.  It was during one of those rest times, as I looked out over the valley in worship of His beauty, His Awesomeness, that I realized what was happening.

He was slowing my climb down to His time so I would stop and see His majesty. To have my breath taken away, not only from the exertion of the climb, but also His paintbrush, His sculptures of nature.

Because I was only able to look up during my climb, I was missing the view. His having me stop to rest was making the mountain seem smaller as He broke it up into sections. He took my mind off the work in climbing the giant, to the vastness of His beauty surrounding it. He made that giant small - right there as I was on it. 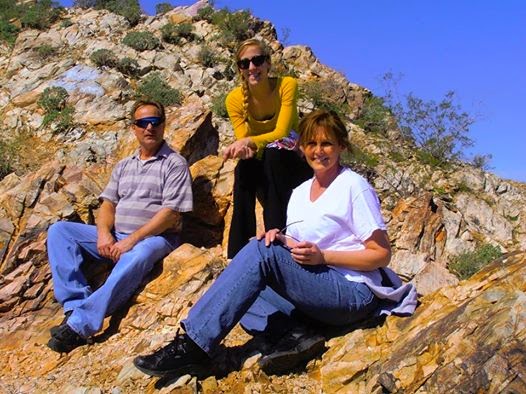 In a way only He can do, He made "us" bigger than that giant. He wrapped me right up into His arms causing me to focus on Him and all He created for me to see and enjoy. Much like the giants, the mountains in life. I am the one making them bigger than Him or me "in" Him.

As I stood at the top, I knew it was only Him Who had brought me there in directing my steps, giving me a body able, and having His Hedge about me.  He and I are "we".

Just as in the all of life, because we are His - nothing can overpower "us". He has supplied us with all "we" need.  Unless we choose to believe in the doubt satan cast before "us".