Seriously, the thoughts that came when reading these verses, "why would they have to be given specific instructions on relieving themselves?"  Bathrooms have been discovered in ruins that date back to Moses' time with the Egyptians.  Even though living in tents, didn't they know what to do when they defecated?  I also found it interesting that along with a stick, they had their weapons. 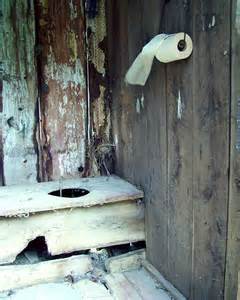 When I was younger, outhouses weren't all that uncommon at the homes of elderly persons.  It wasn't surprising to me that they were still being used.  I can remember my great uncles talking about the "lazy fool over yonder that built their outhouse not 10 feet from their well".  Through listening to them, I learned that you didn't place them near running water either.

Your spiritual camp in which God strolls.
Posted by deby at 3:45 PM