"He thought, "I will soften him up with the succession of gifts. Then when he sees me face-to-face, maybe he'll be glad to welcome me." (32:20)

"He led the way and, as he approached his brother, bowed seven times, honoring his brother.

But Esau ran up and embraced him, held him tight and kissed him. And they both wept.(33:3,4)


Esau - he lost his birthright to Jacob because he was, well.........stupid.  He gave it up for a bowl of lentil stew.  He was then tricked out of the firstborn blessing by his mom, as well as Jacob.

Jacob then left on the advice of his mom to run away to her home country because it was reported to her, Esau was out for the blood of Jacob.

Rather like a soap opera we can make our lives when not following our ABBA.

It was time for Jacob to return home and I imagine there was more than just a little fear in his steps.  He knew what he had done, on purpose, to his brother.  He didn't know if time apart had made the heart grow fonder.

Jacob was scared Esau would kill him.

I love the Chistlike heart we are shown in Esau.  Put into the position where he could have taken care of old business upon meeting Jacob, he instead, "ran up and embraced him, held him tight and kissed him. And they both wept."

Yet another picture of how our Christ accepts us.  Even after we have sinned against Him.  When we have chosen to live life our own way.  Hurting Him.  Denying Him.  Allowing sin to come between us.

What freedom there is knowing, we do not have to "soften our Lord up with the succession of gifts. Christ was The Ultimate Gift.  In Christ, we don't ever have to wonder if when He sees us face-to-face, then "maybe" He'll be glad to welcome us."

He has promised - repent and turn to Him.  He is waiting.  Arms wide open. 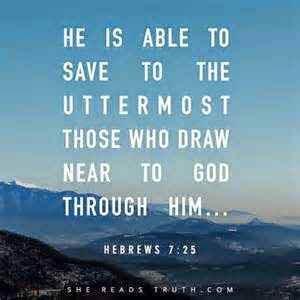