There is an old story, "Stone Soup",  I remember reading to the boys when they were little.

A beggar asked alms at a lordly mansion, but was told by the servants they had nothing to give him.  "Sorry for it," said the man, "but will you let me boil a little water to make some soup of this stone?"  This was so novel a proceeding, that the curiosity of the servants was aroused, and the man was readily furnished with saucepan, water, and spoon.  In he popped the stone, and he begged for a little salt and pepper for flavoring.  Stirring the water and tasting it, he said, it would be the better for any fragments of meat and vegetables they might happen to have.  These were supplied, and ultimately he asked for a little catsup and other sauce.  When fully boiled and fit, each of the servants tasted it, and declared that the stone soup was excellent.

How thankful and blessed I am when I came to my Lord, I didn't have to beg.  He welcomed me with open arms and gave me all that He has.  Even though my status was that of a beggar, He treated me as His princess.

Because that is what and whom I am.

My King!  When I gave my life to Him, I became His daughter.
He gave me not only the gift of eternal life through Christ, He gave me The Gift of His Spirit to live within me - His temple.  How often I take it for granted, do not think of it at all.

I am His temple.

His Spirit lives within me.

His Spirit who guides, protects, comforts, moans and groans relaying my heart to Him, celebrates -

My heart is a vessel He filled with water, pure and clean, in which I made the choice to put in His stone.

When I first received my Rock,  I couldn't make sense as to why He wanted it in my heart.  But then His breath blew into the embers and the flame that came from Him began to heat the water.  He added to my heart My Savior, His Son - the marrow bones becoming a broth.  Through His Word came the seasonings.  The Fruits of the Spirit, of life, His Armor, Him.  The Holy Spirit constantly stirring.  Through His family surrounding me, came the ingredients (gifts and talents) I didn't have. 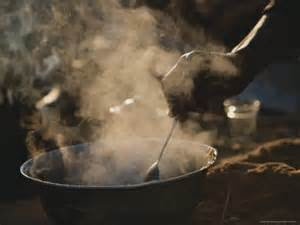 And as I looked into my vessel I could see floating on top amongst the ingredients God had put in, inedible items which were poison in my soup.  Items served up on the platter of doubt by satan.  Items which I had taken off the platter and put in myself, thinking they were needed to enhance the flavor.  Sticks and decayed leaves of fear, insecurities, anger, bitterness, items of sin.

And The Holy Spirit lifts up the slotted spoon, straining out the items bringing poison into the soup.  It isn't until I am with my Abba that we will eat of the soup.  The soup  He created out of my nothing - my emptiness.  The soup, that with continued stirring brings up the hidden sediments laying in the bottom or the ones plainly seen floating on the top, which He removes.

Making it a perfect soup.
It is on that day we will taste of it together and He will declare it excellent!