Doubt can sometimes, most often, lead to fear if you are not grounded in Him, in His Word.  Fear is one of satan's strongest tools and we allow him to have a heyday with it in ourselves.  So often when I become doubtful, which is often as I continually second guess myself, God gives me persons from His Word.  I also find it so encouraging that the people He wrote about in the Scriptures are human just like me.  Obviously Gideon did doubt as he took Purah with him.  Even a mighty warrior of God doubts.  Then God will also show me how He gives courage to we humans and performs  miracles.   Like today - Gideon was told to go up against an "army that was spread out on the plain like a swarm of locust.  And their camels!  Past counting, like grains of sand on the seashore" (7:12).

That's the most important fact that doubt - fear - causes me to lose focus on.  Just as Gideon had Purah his armor bearer, I have God and others He has placed in my life to face the battle together - never alone.  When I refocus on this fact, when I walk in His Promise -

I love that God is proven time after time and knowing He already has beat the enemy.  And I am on the winning side.

In my walk He has grown me immensely in facing down my fears.  I am praying for His boldness.  To stop second guessing myself and know without a doubt I am His.  He created me.  To stand behind His confidence. When I am busy second guessing, I am distracting myself from where/what He has told me to do.  I am promised that I will know His voice.  That I have the gift of the Holy Spirit within me.

I yearn to be like "When Gideon heard the telling of the dream and its interpretation, he went to his knees before God in prayer. Then he went back to the Israelite camp." (7:15)

He had absolutely no fear in the middle of the enemies camp.  He placed God first - he didn't run to be in a "safer" place.  He knelt right there and prayed.  He knew without a doubt - without fear - he was in safety.

I desire to focus on that, know it, live it.

Because I am in God, it is like I am an island in the middle of the ocean.  Always surrounded by Him.  And then, then -  WE  - are surrounded by the enemy.

Get it right that my focus is always to be on Him - not doubt/fear.  Him.  Have faith that no matter how rough or big the "ocean" becomes - He has me surrounded.

And trust - that He is always in control - that I am always safe. 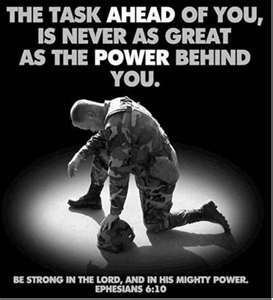 To be bold and "God"fident - no matter where our steps take us.