(God had determined to discredit the counsel of Ahithophel so as to bring ruin on Absalom.) (2 Sam 17:14)

It amazes me how often we as humans think we can usurp God.  How we can "outsmart" Him, slide one by or the best one, "He'll never notice".

God will do as He sees fit - not using "our" way of thinking, but His.  I think about all the pain and suffering that went on because of Absalom.  I greatly admire David in what I have learned about him through scripture.  I admire foremost His love for God.  I admire how he came from being a shepherd to being a king and did so much good for God. 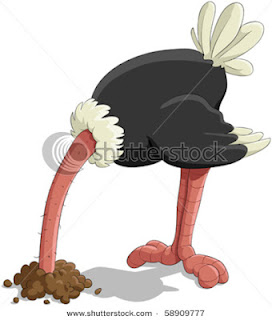 But, I don't admire him as a parent.  Because he chose to bury his head in the sand - his family was able to ruin so much.  Absalom had to have had some good in him at one point as he killed because of his sister.  Maybe that's why God tells us more than once to let Him handle revenge?  I don't know, but there aren't too many "happy endings" when you read about "us" taking it into our hands.

Perhaps if David had of stepped up to the plate when they were younger, different choices would have been made.  I don't know.  I do know though that God doesn't bury His head in the sand.  He will use any method to save us.

That's why it is essential to draw our counsel from Him - and from those that are In His Word.
Posted by deby at 2:18 PM

We had the same idea of David as a parent! It saddened me that the "great warrior" David was kind of a dead beat dad. It just shows you can never judge a book by it's cover! Hope your weekend was blessed!