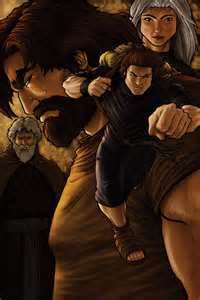 "Esau seethed in anger against Jacob because of the blessing his father had given him; he brooded, “The time for mourning my father’s death is close. And then I’ll kill my brother Jacob.”
When these words of her older son Esau were reported to Rebekah, she called her younger son Jacob and said, “Your brother Esau is plotting vengeance against you. He’s going to kill you. Son, listen to me. Get out of here. Run for your life to Haran, to my brother Laban. Live with him for a while until your brother cools down, until his anger subsides and he forgets what you did to him. I’ll then send for you and bring you back. Why should I lose both of you the same day?” (27:41-45


Wow!  What a number Rebekah is.  Is she serious when she thinks Esau will "forget about what you did to him"?  I like how she uses "you" instead of "we".  Did Jacob pick up on that?

The Blame game is played throughout these chapters.  Esau blamed Jacob for stealing his birthright, which he actually traded it for stew.  I wonder how long Jacob sat in wait for the opportunity to arise.  And then the scheme of fooling Isaac!  Goat skins??????  It is so hard to imagine how they duped Isaac when you read the story.  It is so easy to become self-righteous in my thinking that I could never fall for such a stunt, but I have - do - will.  How very often satan/self put on the "goat skins" and I fall for it.

One of the saddest parts of this is that Rebekah knew this would be the straw that broke Esau's back.  It doesn't say what kind of mother she was to Esau, it only says, "but Rebekah loved Jacob".  Did she feel he needed it because Isaac loved Esau better?  I do know from the scriptures that Jacob was trained by his mother in the art of manipulation.  He chose to go forward with the deception.   He played his role as Esau so well, he fooled his father.

I wonder if they thought they were also fooling God?  Rebekah told him not to worry about a curse, she would take it upon herself.  She was putting herself and her son in the place of God.  They were doing things their way - not God's.  There was no honor or respect about them - only the play acting to get what they wanted.

"Why should I lose both of you the same day?”  Was she upset that she was now going to lose Jacob too?  How long did she think she would have to live without Jacob?  Did it really bother her to sacrifice Esau?  How did Isaac react?

Having two sons, I can not even imagine not loving them the same amount.  I praise God that they have always been close.  Since the moment I found out I was carrying Nichalas, Adam was involved.  He went with me to every doctor visit and listened to his little brother's heart while he was inside my womb.  They talk to each other almost every day.  Curt and I both prayed that our sons would grow up as best friends.  We didn't want division between them as it has been throughout our families.  Rebekah was intentional about dividing her sons.  Her family.

And for what?  Material blessings.  Stuff.

So much deception, manipulation, division, over stuff.

I wonder if she was so far removed from being a Christlike mother - did she ever lay awake at night thinking about what she had created?  Or did she roll over and go to sleep thinking she had gotten her way.

It is so essential to be a Christlike mother for the sake of our families.

This generation and beyond.