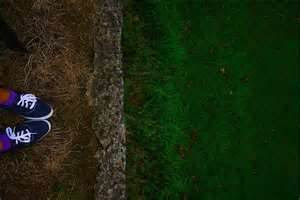 That’s how they came to part company, uncle and nephew. Abram settled in Canaan; Lot settled in the cities of the plain and pitched his tent near Sodom.

The people of Sodom were evil—flagrant sinners against God.

When the boys were little and something had to be divided, I had one divide and the other choose, to prevent any squabbles about unfairness.  Lot had the option of first choice and from the description, he chose the best.  At least what his eyes thought was "the best".

It doesn't say why God instructed him to, "open your eyes, look around".  I wonder if it is because Abram was envious and coveted Lot's choice and couldn't see that the land that remained was actually the "best choice".  If he allowed jealousy to seep in, blinding him of what God was giving him.

It does make me think of the many times I have been guilty of that though.  Of  when I am so focused on what I didn't get that I can not see what I am getting.  The times that I believe "the grass is greener".  How I am not focusing, not having faith in what He has given me.

Abram's faith is so astounding!  He up and left all he had, taking his family with him, not knowing where they were heading, following God's command.  He was 75 years old.  I don't know how people aged back then, if 75 was compared to our 20's.  I do know that Abram left his comfort zone and headed out into the unknown - at any age that is hard.  I read of a man who had such faith and yet came up with his own plan for safety in saying his "knock out" of a wife was his sister.  And God used this plan to prepare Abram materialistically - he came out of this a very rich man. He and his family also came out of this alive.  God uses everything for His glory.

So, the times I feel that I have been given the short end of the stick - do I "open my eyes and look around"?  Do I continue to allow sin become such a part of my heart that I don't recognize it in front of me?  How long do I stay in the self-pity state?  Do I become tolerant of sin?  The scripture points out in the middle of all this great land Lot was receiving there was the city of Sodom.

"The people of Sodom were evil—

What is flagrant?  Disgraceful, monstrous, egregious. Flagrant, glaring, gross, outrageous, rank are adjectives suggesting extreme offensiveness. Flagrant with a root sense of flaming or flaring, suggests evil or immorality so evident that it cannot be ignored or overlooked: a flagrant violation of the law. Glaring meaning “shining brightly,” is similar to flagrant in emphasizing conspicuousness but usually lacks the imputation of immorality: a glaring error in computing the interest. Gross which basically signifies excessive size, is even more negative in implication than the foregoing two terms, suggesting a mistake or impropriety of major proportions: a gross miscarriage of justice. Outrageous describes acts so far beyond the limits of decent behavior or accepted standards as to be totally insupportable: an outrageous abuse of the public trust. Rank with its suggestion of bad odor, describes open offensiveness of the most objectionable kind, inviting total and unalloyed disapprobation: rank dishonesty, stinking to high heaven; Only rank stupidity would countenance such a step.

Lot freely settled in the cities of the plain and pitched his tent near Sodom."  Not pitched his tents temporarily, but "settled in".  He set up his home.  He was playing with fire.  He was allowing his comfort zone to be near the place of sin.  As a leader, he was conditioning his family to be tolerant and to "live" close to sin.  We need to "settle in" with God.  As far from sin as possible, for He is Holy and can not be a part of sin.

Where do I "settle in"?  What sin do I tolerate?  Ignore?  Allow to become "the norm".  How often am I looking over the other side of the fence, desiring it so badly, that I am blind to the sin?  How often do I go on in faith with what He has given me? Where He is leading me?  How is my faith in "His choice"?

How often do I "not open my eyes" to the blessings that He has given me in the "short end of the stick"?