"God spoke to Cain: “Why this tantrum? Why the sulking? If you do well, won’t you be accepted? And if you don’t do well, sin is lying in wait for you, ready to pounce; it’s out to get you, you’ve got to master it.” (Genesis 4:6-7)

"Cain had words with his brother. They were out in the field; Cain came at Abel his brother and killed him." (Gen 4:8)

I think about the times that I am like Cain.  How I allow the sins of jealousy, coveting, envy, malice (just to name a few), go from "lying in wait" to becoming part of my heart.  I recognize the times that I am "throwing a tantrum, sulking" because things didn't go "my" way.  Even the times when I can see as plain as the nose on my face, that things are going God's way.

I can become so wrapped up in my immaturity that I become disrespectful to my Daddy.  Yesterday, the verses He gave me pointed out again that He is the creator of all.  That He took nothingness and made it into something.  He pointed out again - He is "I Am".

And yet, I will speak to Him as Cain did - total disrespect, defiance and arrogance.  Just like Cain - I at times see myself in a higher power than He is.

And still He loves me unconditionally, but does He like me?  Does He like what He sees in my heart, my actions?

For every single choice I make - there is a consequence.  At times, even when I do the Christlike action, the consequences from others may not be Christlike and I will be affected by that.  But, the real issue isn't about them and me.  It is about God and me.  He knows my heart.  He knows it better than I do. He knows that when I fail, when I feel the sick feeling from the conviction of the Holy Spirit, when I feel the overwhelming sadness from hurting my Savior, my Christ - who gave His all.  He knows that I so want to please Him.  Because I so, so love Him.

" Cain said to God, “My punishment is too much. I can’t take it! You’ve thrown me off the land and I can never again face you. I’m a homeless wanderer on Earth and whoever finds me will kill me.”
God told him, “No. Anyone who kills Cain will pay for it seven times over.” God put a mark on Cain to protect him so that no one who met him would kill him.
Cain left the presence of God and lived in No-Man’s-Land, east of Eden." (Gen 4:13-16)"

God is so much about giving us chances.  He doesn't want to lose us.  He "desires" for us to be with Him - for eternity.  He could have easily killed Cain.  Cain didn't get it.  Cain was so concerned about getting killed, he couldn't see that he was going to be cast away from God.  "Cain left the presence of God and lived in No-Man’s-Land, east of Eden".

To me - that is hell on earth.

I pray that I will not dehumanize people.  That I will see their God value - to look at them through Christ eyes.  To see them as they live in "no-man's Land".  I pray that my heart will overcome the choice of taking things personal and instead stand firm in Him for this spiritual battle He has placed me in.  That I will love and see something likable in everyone.  To not be judgmental, self righteous, or defensive.

I pray that when God looks at me He sees what He saw in Noah.

Surrounded by a world that was totally evil.  A world that God was going to destroy because of sin.  I pray that I may be like Noah and follow God's lead - even when it doesn't seem fair or make sense - that I will be "different". 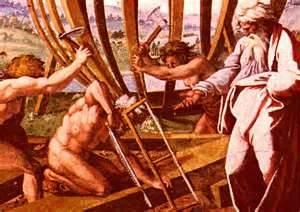 
Up to this point, the world had never experienced rain.  I don't know if Noah was familiar with boats, rivers, seas, but he had to think at some point God was off His rocker.  Noah was human - just like me.  It doesn't say if God provided the resources or if Noah was a carpenter.  I can only imagine the ridicule and rejection he received for being "different".  How was his relationship with his wife and sons?  Did they submit to him willingly or with resentment?

And the vastness of this ark. All he had was the spoken instructions - and the promise.  The promise that God would be with him.  Guiding him.  Much like He does with me.  I too have His spoken instructions - His Word.  I have His guidance - The Holy Spirit.  I have my ark to save me from the world, its' evil, the flood - my Savior.  And I have the promise that He is with me - as we journey through my life here.

What encouragement I receive from Noah's life.

So when the going gets tough.  When things don't make sense.  When I want to submit to the "sin that lay waiting", I remember Noah.  "Noah did everything God commanded him to do." (Gen 6:22)

I want to please my Daddy.  Because I love Him.  I like Him.  I pray that He likes me, because it pleases Him.  I want Him to use me for His glory - not mine.  I want others to not see me, but to see Him.  I so want His light to shine through me in this dark world.  I pray that He will stand out against the darkness of the world in my choice to be different and follow Him.

I pray that when He looks at me, I remind Him of Noah.