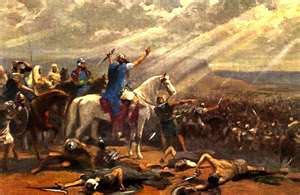 God is giving them the Promised Land. I wonder did they have any clue as to how much blood and destruction it was going to entail to receive it? Did they think the 40 years of wandering were the toughest part of the journey.

Sometimes, I really feel because of our choices, we have to endure an even greater battle to get where He wants us to go. I know though that His glory will come out in all things. And like little children, if something comes easily, we take it for granted, become bored with it. We don't usually appreciate or value it.

To have rest from the war - what a wonderful season to walk through. While on earth, there isn't a time when we will have a life totally without some part of a war in it, but we do have His peace and joy. Being a follower of Christ isn't easy. Particularly, when we allow our choices to take the place of Him. Thankfully, throughout all the choices - good or bad - He is still there. And when we follow His lead, accept His choices - it makes being in active duty a time we can grow and build in/for Him.

I am thankful for my times of rest from active duty. The war has been won by Him, but the battles are still being fought. We are continually surrounded by evil, in a raging spiritual battle. It can wear you down. That is why while resting we have to take care of us, fortify us in His Word, communion with Him, listen and learn, prepare for the next time in active duty.

Rest is not about being lazy or doing nothing. It is about preparing. For we are in the midst of war.