Lev 26:11-13 "I'll set up my residence in your neighborhood; I won't avoid or shun you; I'll stroll through your streets. I'll be your God; you'll be my people. I am God, your personal God who rescued you from Egypt so that you would no longer be slaves to the Egyptians. I ripped off the harness of your slavery so that you can move about freely."


When I was young, I didn't really have any friends. God blessed me with one or two here and there, which today I can look back and see He was trying to save me. I was made fun of - today the word would be bullied. I was not included, ganged up on and threatened - physically, verbally abused. All the times in gym I cringed, when the captains had to pick teams. I was always picked last and they would argue about having to have me on their team. 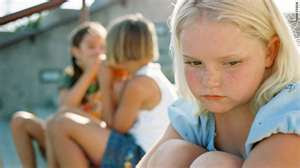 I always felt terribly alone - and I wanted to die.
Never did I try suicide with razors or ropes. But, I did with self-destruction. Drugs, alcohol and men. At one of my lowest points, I can remember sitting on the windowsill, nine stories up, and just wanting to slip off.

Something stopped me. Looking back I see now it was God. Then - it was just "something".

Not until Adam was born did I really "buckle down" and get to know God. I know one of the reasons I love this verse is, "I'll set up my residence in your neighborhood; I won't avoid or shun you; I'll stroll through your streets. I'll be your God; you'll be mine". He has taken up residence within me. He knows me through and through and still He loves me. He will never avoid or shun me. He desires to be with me. He is mine and I am His.

I don't know why that I was bullied. I was very shy, no self-confidence. Probably an easy target. I do know today I am able to recognize the victims. To have empathy for them. I do know one of my gifts is encouragement. And that is what I try to do. To help these victims God puts in my life. I know I do not want anyone to go where I have been. It really was a type of hell.

He didn't rescue me from Egypt, but He did rescue me from this world. A world that lied to me, made me feel unloved, unwanted, undesirable. He has whispered into my heart truths - of how "fearfully and wonderfully made I am", of how I am "in the palm of His hand". How He gave His only Son - for me -

Because He loves me.

I know also, another reason I love being in His Word, carrying it in my heart, is because it is Truth. Truth that I can stand on and in. Truth that makes me want to live for Him.
Truth that "He has ripped off the harness of my slavery so that I can move about freely"

I know how this feels, I went through similar bullying. The difference was I was a Christian being bullied so I didn't turn to drugs or alcohol or men (Luckily, (?) protected by God (?)I never even got a date!) But I did feel alone and it sunk me into poor self-esteem and took away all my confidence. I also had times I felt like dying but knew God didn't approve of that by my own hand (more protection)so I wrote poems to release my feelings. I too gained empathy for the bullied. I think my nurturing nature may come from the depths of that but I also became a people pleaser. Becoming a people pleaser is not always the answer. It has problems of its own attached. You can't please people consistantly and this brings more failure. What I really needed to become was a God pleaser. Although in my life I have not always pleased God either, He is the only one who didn't or doesn't judge me on this...but forgave and forgives me and as you brought out "keeps me in his arms" (it's my fault if I try to escape from them--but when I come crawling back--he is always waiting there, arms wide open to receive me again.) I like the comfort of His arms...I sometimes can't feel them...apparently, that is when I need to buckle down and return to them...my intent is to start yesterday (because I did hah) and wiggle my way back into the warmth and security of his arms from which I have not intentionally but by my nature snuck away from in this busy "thing called life". Thank you for your insight.